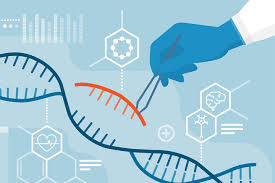 German agricultural organizations have called on the new centre-left 'traffic light coalition' to allow new gene technologies such as CRISPR/cas for greater food security and sustainability in agriculture.

The more than twenty German organizations for plant breeding, agriculture and animal husbandry call it incomprehensible that the new genetic techniques are not included in the new coalition agreement.

It is argued that the challenges ahead cannot be met without suitable innovative instruments for plant cultivation and breeding. The associations recall that agriculture faces major challenges: food security, dealing with climate change, protecting the environment and biodiversity while maintaining competitiveness.

The implementation of the European Farm-to-Fork strategy and the plans of the new federal government to achieve 30% organic farming within ten years will have a major impact on agricultural production productivity in Europe, the agricultural organizations warn.

“Further innovations in plant cultivation and plant breeding are therefore urgently needed to prevent a drop in yield. For this we also need suitable tools that are already standard outside of Europe, such as the CRISPR/Cas gene scissors,” said Dr Henning Ehlers, General Manager of the German Raiffeisen Association.

Just last month, the European Commission completed an investigation into possible modified procedures for the approval of new breeding techniques such as CRISPR/Cas. EU Health Commissioner Stella Kyriakides recently said at a symposium that the EU will not compromise the safety of new methods.

But according to Kyriakides it is also necessary to deal with climate and environmental problems. An important part of this is the new genetic engineering, Kyriakides said recently at a conference of the EU committee, according to aiz.info. "The cost of doing nothing is high," the commissioner warned of possible missed opportunities.

According to her, the European Commission focuses mainly on innovations and on new resistant varieties that make it possible to reduce pesticides.