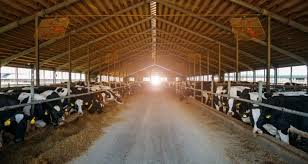 In principle, the Netherlands is positive about the proposal of the EU commissioners to include the larger cattle farms under the directive against industrial environmental pollution. The Netherlands also agrees that not only large but also smaller pig and poultry farms will be covered.

As a result, in a few years' time these companies, just like industrial polluters, will have to have the latest techniques against environmental pollution in their company.

A few other EU countries also expressed their support, but kept the necessary blows. Most countries do not agree that livestock farms with more than 150 animals will soon fall under the scheme. And the proposed lower thresholds for pig breeders and poultry farmers also see them as a threat to their small family farms.

For cattle farming, this means that farms with more than 150 head of cattle will be included. For pig and poultry farms, the existing thresholds will be lowered to 300 sows and 500 pigs, and to 10,714 laying hens and 5,000 broilers.

Environment Commissioner Virginius Sinkevicius contradicted Monday at the EU Agriculture Council in Brussels that the new scheme would be far too extensive. According to him, the directive will soon apply to a maximum of 13% from the commercial livestock, pig and poultry farms that are jointly responsible for 60% of the emissions of ammonia and 43% methane in the EU.

Many agriculture ministers said on Monday that they had serious reservations about the 'equalization of livestock farming with industry'.

Agriculture Commissioner Janus Wojciechowski said earlier that it will take another year and a half before the EU legislation is amended, after which the 27 EU countries have yet to incorporate it into their own laws and that livestock has three years to comply. to fit. Moreover, Brussels is going to draw up a consequences analysis ('impact assessment'), as is customary with almost every new law.

The Dutch LNV top official Guido Landsheer (who replaced acting minister Carola Schouten) said that the Netherlands wants to keep the implementation in its own (Dutch) hands. He indicated that the rules must be flexible and proportional enough so that they can align with aspects such as national implementation and enforcement aspects, as well as with industry practices.

In addition, the Netherlands will be drawing up its own impact analysis. The Netherlands will also consider the new rules in relation to the transition in Dutch agriculture, Minister Schouten wrote earlier in her annotated letter to parliament.