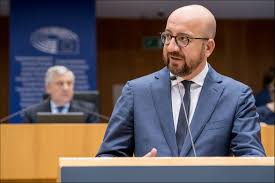 The European Union should cut its agricultural budget in the coming years, according to EU President Charles Michel. He wants to reduce the EU budget 2021-2027 from 1100 billion to 1074 billion euros, including by cutting agricultural expenditure, as the Netherlands wants.

Michel has not yet mentioned detailed austerity amounts, but may refer to the reserves of the rural fund. Moreover, the Netherlands is allowed to maintain the 'temporary' billions discount on the annual payment for another seven years.

With his proposals, the EU president responds to the wishes of Dutch Prime Minister Mark Rutte, who within EU is obstructive about the EU budget and about the corona recovery fund. He hopes to reach an agreement on these two financial files with a slightly lower multiannual budget (MFF) than that proposed by the European Commission at the top of heads of government.

Incidentally, it remains to be seen whether Michel's new compromise will bring the EU heads of state into line, and it remains to be seen whether Ursula von der Leyen's European Commission will be satisfied. And it is already known from the European Parliament that they consider the 1100 billion now proposed by Von der Leyen to be the absolute minimum, and actually want even more. However, the EU practice is that the heads of state always have the final say.

For the corona aid package, Michel maintains the ratio of two thirds in grants and one third in loans to the southern EU countries most affected by the corona virus. The fund is to contain 750 billion euros. Prime Minister Rutte and the three other 'economical' countries Sweden, Denmark and Austria believe that this support should only consist of loans and under condition of reforms.

Michel said after the presentation of his compromise proposal “to respect the sensitivity among Member States. This is a difficult issue. But I rely on political courage. ” EU President Michel also proposes to set up a € 5 billion reserve fund for the countries, such as the Netherlands, most affected by the UK's departure from the EU.

The compromise proposal, which came about after weeks of feverish consultations with the divided Member States and a visit to Rutte, meets at first sight a number of Dutch concerns and requirements. Another important point for The Hague also returns. Michel wants to make subsidies to member states subject to conditions regarding the rule of law, which means that subsidies can be withdrawn from sleepers such as Hungary or Poland, if necessary.

In a speech, Merkel on Wednesday called on MEPs to be responsible and willing to compromise, as the EU faces major decisions for the coming years. And Merkel also said he expected a level-headed and honest approach from the heads of government who will meet at a 'financial summit' in a week.

Heads of state like Merkel and French President Macron, and the European Commission, want to set aside hundreds of billions for this as soon as possible, but the cross-four four EU countries are not yet ready to do so. Behind the scenes, there is intense diplomatic and official pre-consultation on the compromise-of-a-compromise now presented by the EU Presidency.