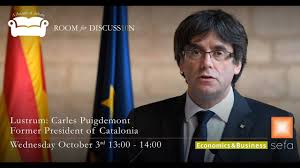 The European Parliament will officially recognize Catalan politicians Carles Puigdemont, Toni Comin and Oriol Junqueras as members next week. The three Catalans were elected as MEPs in May.

They have not yet been able to take their seat, because Spain demanded that they first swear allegiance to the Spanish constitution. Puigdemont and Comin are being sought by Madrid in connection with an illegal and chaotic referendum in Catalonia. With this, separatists in the region around Barcelona wanted to separate themselves from Spain in October 2017. Virtually exclusively separatists voted in the referendum and it led to a lingering political crisis and major economic damage.

Former party leader Junqueras is already in jail in Spain. The leader of the left-nationalist party ERC was sentenced to over 13 years in prison in October for his role in the Catalan independence process. According to the judgment, he may also not hold a political or public position during that period. The Catalan nationalists dispute that.

Last Friday, the Spanish electoral council ruled that Junqueras should remain in prison and not be a Member of the European Parliament, a decision to be confirmed or denied by the Supreme Court in Madrid in the coming days.

The two politicians from another Catalan party, Puigdemont and Comin, stay in Belgium and feared being arrested if they set foot in Spain.

The Belgian judiciary has since decided to ignore a Spanish arrest warrant against two separatist Catalan politicians. A decision was to be taken on 3 February, but according to Spanish media the order disappears in a drawer because the two have won parliamentary immunity.

On December 16, the European Court of Justice paved the way for the European Parliament for the Catalan leaders. They had conquered a European seat on 26 May, but they could not take it because a Spanish law requires European elected representatives to first swear loyalty to the Spanish constitution in Madrid.

Previous articleEU and MO soon for the choice: support for Tehran or Washington
Next articleTurkey and Russia divide the loot in Libya: EU and US further offside

The chairman of the German poultry industry believes that European rules against the killing of male chicks should be introduced as soon as possible.
read more

Bulgarian villages: less glyphosate in agriculture to save bees