Home EU EU also this year largest exporter of pork; most to China 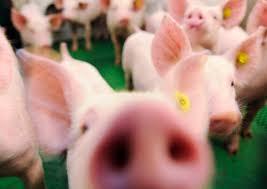 With an expected share of 46.2 percent of the world's pork production of 110.5 million tons, China ranks first in the world ranking with 51 million tons. Compared to 47.5 million tons in 2021, this is an increase of 7.4 percent.

In addition to the common agricultural policy, the European Commission also wants to update the rural policy. It was recently agreed that agricultural subsidies will be with...
read more

In ten years, a quarter more chickens in Poland but far fewer pigs

In Poland, the poultry sector has grown by a quarter over the past ten years. Poland's 2020 agricultural census shows that the...
read more

Agricultural consultants can help countries with their food strategy

A food official from the Ministry of Agriculture, Nature and Food Quality in The Hague believes that the Dutch agricultural consulates at embassies abroad have a...
read more

The second plenary meeting in Strasbourg of the Conference on the Future of Europe (CoFoE) took place last weekend. Citizens, institutions...
read more

Committee on Agriculture not satisfied with ownership of the CAP

If the European Parliament wants more say in future innovations in the common agricultural policy, then the EU politicians should limit their wishes to ...
read more