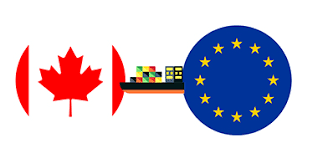 After five years of hesitation and debate, the German Bundestag has ratified the Ceta transatlantic trade agreement with Canada. Critics say the deal creates special rights for foreign investors and puts corporate profits above climate and environmental needs.

The European economy hopes for a boost in trade with Canada and further trade agreements with other countries such as Chile and Mexico. The approval of CETA is part of the now established international trade strategy of the new centre-left German coalition.

That new trade strategy also aims to deepen trade relations between the EU and the US, which are currently overshadowed by huge subsidies for companies producing in the US.

In addition, sustainability standards should be embedded as standard in future trade agreements. At the insistence of the Greens, additions have been included to include in trade agreements the same climate and environmental criteria as used in the EU.

CETA cannot enter into force until all 27 EU member states have given the green light. However, many countries are still missing, including Italy and France. The provisions of the treaty have been provisionally applied since September 2017.

This means that 98% of all goods traded between the EU and Canada are no longer subject to customs duties. Canada itself has already completed ratification. However, according to industry associations, the volume has already increased by about a fifth since the provisional application of CETA.

Many German farmers still vote CDU, but less and less….