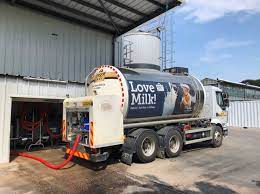 About 600 pigs have been killed on farms across the country, according to Zoe Davies, the director of the National Pigs Association, who said culling had begun on a "handful" of farms.

Pig farmers have been warning for several weeks that staff shortages in slaughterhouses have led to a backlog of as many as 120,000 pigs that have to stay on farms where there is less and less space.

The meat industry is struggling with labor shortages due to the departure of foreign hired workers after Brexit and the corona pandemic, while a lack of deliverers and drivers has affected transport chains.

British dairy farmers had to destroy tens of thousands of kilograms of milk last week due to a lack of truck transport. It is estimated that the transport sector is currently short of approximately 100,000 drivers.

A dairy farmer in central England had to destroy 40,000 kilos of milk in the past two months because there were no drivers to come and collect it. This is mainly because many truckers returned to the European continent after Brexit.

The United Kingdom produces 15.3 billion kilos of milk annually. Only a third of British dairy farmers have worked on a farm for five years or more. Few Britons apply for a job on a farm. As a result, 42.1 percent of dairies still rely on EU workers, according to a recent survey by the Royal Association of British Dairy Farmers.

Disagreements between the European Union and Britain over customs controls in Northern Ireland have led to the resignation of the Northern Ireland...
read more
International