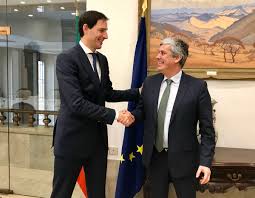 Dutch 'no' to EU budget and corona fund now to 'maybe'

It will be “very difficult” to agree on the EU multi-annual budget and the Corona Recovery Fund by July, given the disagreements over the size and distribution of the funds, EU officials and diplomats in Brussels acknowledge.

"It would be very good to have a political agreement in July," Commission Vice-President Valdis Dombrovskis admitted after Tuesday's financial and economic ministerial meeting. But Dutch Prime Minister Mark Rutte, one of the four opponents of higher national contributions to the EU budgets, is already known to be 'in no hurry'.

EU President Charles Michel has since contacted EU leaders to seek their views on the European Commission compromise proposal. After this first round, a EU official told EURACTIV that it would be “very difficult” to achieve the necessary unanimity of the 27 leaders before the summer break.

Almost iedereen agrees that it is in a hurry, as the EU is facing the deepest recession in its history. To counter the economic consequences of the pandemic, the European Commission has proposed an unprecedented recovery fund of EUR 750 billion.

The EU leaders also failed to reach an agreement on the budget in February, as the differences between the Northern, Southern and Eastern Member States could not be removed. The updated MFF and the recovery fund are in particular questioned by the Netherlands and Austria, but also by Eastern European countries such as Hungary.

Germany wants a "very quick" compromise to be found on the EU recovery fund to help countries affected by the corona crisis. Some EU countries are in serious trouble and need help quickly, Germany said in a consultation with the EU finance ministers.

The Netherlands, along with Sweden, Denmark and Austria, took the position that the fund should not consist of grants, but of loans. France and Germany disagree. They want to donate EUR 500 billion to the affected countries under certain conditions. After that, the European Commission came up with a kind of compromise whereby the money will now consist partly of gifts and partly of loans.

In the EU ministerial meeting, the Netherlands this time focuses the objections on the size of the fund and the EU multi-year estimate. According to Minister Hoekstra (Finance), the proposals will lead to 'substantially higher remittances' for the Netherlands, tNededre starting with an increase from 1.5 billion in 2021 to 2.3 billion in 2027.

The Netherlands does recognize that it is desirable to cooperate with other countries. If ieder country tries to solve the crisis itself, the 'symmetric shock of the COVID-19 outbreak follows asymmetric recovery'. The government is also positive about the link between aid and the implementation of reforms and investments in digitization, research and greening. But Hoekstra has 'serious doubts' about the financing and the size of the fund.

Previous articleEU agriculture ministers hold off F2F and Green Deal boat for a while….
Next articleUS court reverses use of four pesticides