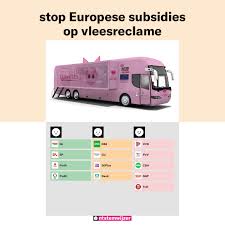 Next year, the European Commission will come up with a new proposal on subsidies for advertising meat and dairy. A consultation round has now been started for this.

Draft versions of the Green Deal initially stated that Commissioners Timmermans (Environment) and Kyriakides (Food Safety) intended to abolish this subsidy, but after protests from LNV Commissioner Wojciechowski and the Agriculture Commission, this was watered down.

According to a Greenpeace report presented on Thursday, the EU currently spends a third of its agricultural promotion budget on meat and dairy advertising (32% of € 777 million in five years). The investigation also found that the Commission spent some € 146 million on fruit and vegetable campaigns; 19 percent of ad spend.

Greenpeace is calling on the EU to stop advertising meat and dairy and use that money to support ecological, small-scale farmers in Europe, and to help conventional farmers make the transition to ecological farming.

Today's spending "contradicts scientists' warnings about the disastrous impact of industrial livestock farming on nature, the climate and our health" and is an irresponsible use of tax money, Greenpeace said.

More than 70 percent of the farmland in the EU is used to raise livestock or produce animal feed. Europeans consume about twice as much meat as the world average and about three times as much dairy products.

Previous articleAdvice to EU: 'Less cages and pens good for animal welfare'
Next articleNo Dutch resistance in EU against camera light in the fishing hold of the cutter

In Germany, a livestock transport of several hundred calves to Morocco has become the cause of the lingering political conflict over a new ...
read more
International