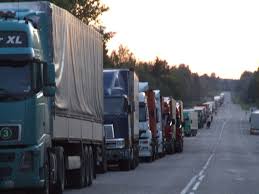 The new border controls between the European Union and the United Kingdom, which will be introduced from January, will cause delays for carriers and carriers at British ports on the Irish Sea and the English Channel. This puts British exports to the European mainland at risk.

British ports do not have the space to park thousands of trucks because customs have to inspect the cargo. The government plans to build 'mega-sized customs parking lots' inland. Transport problems in the ports also threaten the export of Ireland because their goods are also transported over (British!) Land.

According to surveys, the British lamb meat sector would be the biggest loser in a no-trade Brexit, with about 89% of the lamb produced in Britain currently going to European markets. It is expected that some 3 million fewer lambs will be exported next year. If they hit the British market, the price will also come under pressure.

If the current transition period ends on December 31, it will also have an adverse effect on the UK agricultural sector, FarmingUK writes. Between 2013 and 2017, 82% of the beef exported and 78% of the dairy, eggs, fruit and vegetables went to EU markets.

Fruit and vegetable production in the United Kingdom is largely focused on domestic markets, with little export, yet much of the agriculture depends on external markets, mainly the European Union. At the same time, many EU producers are dependent on the English market. In 2018, 80% of the meat products arrived in Great Britain and almost 100% of the dairy products and eggs came from the EU.

UK consumers buy a wide variety of EU products every day, especially fresh fruits, vegetables and meat. In 2018, the European Union exported about £ 38.2 billion (over £ 15,000 billion) worth of food to Great Britain.

Ireland is considering using additional ferry services from Irish ports to Cherbourgh in France. Every year, more than 150,000 trucks transport more than 3 million tons of freight across England to and from Ireland via British highways and ports to reach the European continent.

Tensions between the UK government and the European Union over controls at the Northern Ireland sea border are rising again, and…
read more
International

Own British trade agreement with Australia: no zero tariff yet

Britain has offered Australia a trade treaty that will phase out reciprocal import taxes within 15 years. Minister of International Trade Liz ...
read more

The European Parliament wants a ban on force-feeding of animals throughout the EU, such as for the breeding of fatty goose livers…
read more

Conservatives do not win many Labor voters but their seats

Scots want referendum on independence and stay in EU