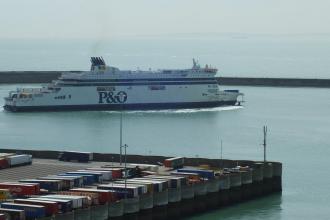 The Dutch Food and Consumer Product Safety Authority foresees a lot of problems for the export of Dutch agricultural products to Great Britain from 1 April. Then the British will start using their Brexit import registration.

For the import of all types of agricultural products such as fresh vegetables, flowers and dairy, a separate health certificate is mandatory from 1 April

Brexit coordinator Peter Verbaas of the NVWA says that shipments without the correct papers will run into problems. He calls April 1 'perhaps the most important Brexit day of the year'. In that case, when exporting from the European Union (EU) to the UK, flowers, vegetables and fruit must, among other things, be provided with a phytosanitary certificate. Many veterinary products made from animal raw materials must have a veterinary health certificate.

Under UK procedures, certification of 'high risk products' such as trees, perennials and live animals has been mandatory since January 1. For almost all other agricultural products, the certification obligation applies from 1 April. Each product category has its own veterinary health certificate.

As of January 1, 2021, British agricultural goods exported to the EU are subject to the import regulations in the UK for all countries outside the EU. But the British have opted for a phased introduction for their import. This also means that until April 1 there is still uncertainty about the details of various export certificates.

The NVWA feared that some entrepreneurs had only prepared to a limited extent for the changed import processes. These fears were confirmed at the beginning of this year when some meat shipments had to be stopped. Some shipments became so delayed that they were no longer fit for human consumption and had to be destroyed.

Verbaas warns that the costs of destruction and the loss of cargo will be borne by the entrepreneur, even after 1 April.

The British Ministry of Agriculture, Defra, is organizing a series of webinars in February and March for companies from the EU that export products of animal origin to Great Britain (with subtitles in various languages, including Dutch).

Furthermore, several webinars are also organized for importers (in Great Britain) of products of animal origin, composite products and fish and fishery products.

Previous articleSeven EU countries nevertheless start with the French food label Nutriscore
Next articleConsultation of the Dutch in Morocco about phosphate, water and agriculture

Stocks in Northern Ireland stores not enough after Brexit

The British government and the European Union have drawn up an action plan during crisis talks to address the problems surrounding the Northern Ireland protocol ...
read more
EU