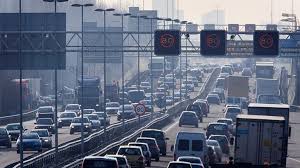 Last year, CO2 air pollution was reduced in all countries of the European Union. Eurostat calculated that emissions from the combustion of fossil fuels - such as oil, coal and natural gas - fell by 10 percent last year.

The EU researchers say this is because of the travel restrictions introduced by the corona crisis, as well as the cooling down of the economy.

“In almost all Member States of the European Union, a contraction in the consumption of oil and related products could be observed,” it says. 'Natural gas consumption fell in fifteen Member States. On the other hand, the share of renewable energy sources - mainly generated by wind, water and sun - in the electricity supply showed a small increase. '

The largest decline was recorded in Greece, Estonia and Luxembourg. In those countries there was a contraction of 18 percent. Germany, responsible for a quarter of the European Union's total emissions, reported a decrease of nearly 9 percent.

Despite this temporary decrease in air pollution, several European countries are at risk of not meeting their international climate targets for the year 2020. After the Dutch government (in the Urgenda trial) had already been sentenced by judges to comply with the Climate Agreements, courts in France and Germany have now also ruled that those countries must do more to combat emissions.

In addition, Poland also appears to be causing a number of bottlenecks. Poland was the only EU country that did not want to commit to the Paris Accords to be emission neutral by the middle of this century.

About three quarters of the Germans think that the packaging of food should have a climate label. Such a label should clearly...
read more