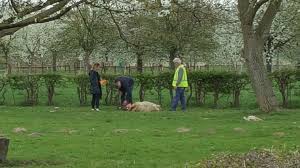 The Belgian Association of Livestock and Sheep Farmers (VSH) has requested more subsidies for the construction of wolf-resistant fences. They also want to purchase guard dogs.

The livestock farmers now receive 80% of the material costs back, but not the man-hours and other costs. In practice, this means repayment of 44 percent of all costs incurred. If you look at it at five years, it is even about 25 percent of the costs, says André Calus, chairman of VSH.

In recent years, the provinces of Antwerp and Limburg in particular have been confronted with an increasing number of wolves living in the wild, and fatal attacks on cattle in pastures. Last year, 74 livestock farmers applied for a subsidy for the construction of wolf-resistant fencing, against 55 applications in 2019, with an unchanged budget.

Last year, in 66 registered attacks in Belgium, more than a hundred animals fell prey to the wolf, more than double the number of the previous year, when 51 dead animals were counted. The attacks all took place in Limburg and Antwerp, in which mainly sheep (87) died. Other prey were mainly fallow deer and (dwarf) goats.

The Flemish Minister of Environment and Nature Zuhal Demir (N-VA) pointed out that in all cases the killed animals were not sufficiently protected against the wolf. The attacks took place within a fence that was not wolfproof, the minister said.

Minister Demir foresees an increase in the allowance for the coming period, possibly also for the purchase of guard dogs. A Belgian sheep farmer has recently had favorable experiences with this. In addition to wolf-resistant fences, he also purchased four special dogs to protect his flock of sheep: three Spanish large mastins and a Macedonian shepherd.

When a wolf approaches a sheep pasture, a dog barks to warn the other dogs. And when the wolf hears that the dogs are in the majority, they drip off, as explained in Het Nieuwsblad. Minister Demir is already prepared to investigate these practical experiences in order to possibly subsidize the purchase of protection dogs.

Previous articleStocks in Northern Ireland stores not enough after Brexit
Next articleGerman Animal Welfare will soon also be for insects; Merkel seeks support

Spain wants to introduce an exception for olive oil in the European food label Nutri-score. The Spanish government has let the EU ...
read more
International