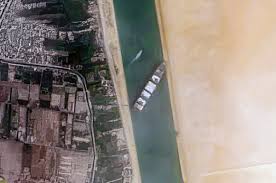 The blockage of the Suez Canal may take weeks. Hundreds of ships are already seriously delayed because they have to wait or are about to circumnavigate South Africa. Time is running out, because more than 321 ships are already waiting for passage at Port Saïd at the northern canal entrance.

There are now also live livestock animals on twenty waiting ships. It is not yet clear whether there is sufficient food and water for the animals on board. Usually, the large livestock transporters and shipowners have some leeway in their travel schedule, but a long-term blockage of the Suez Canal will not have been anticipated.

Just last week, the Party for the Animals once again argued for a total ban on animal exports to countries outside the European Union. “Unfortunately, it is no exception that hundreds to thousands of animals die during sea transports.

Transports to Africa and the Middle East take weeks. There are also more frequent disturbances and accidents. We have to get rid of these kinds of transports, ”said Dutch MEP Anja Hazekamp.

The European Commission previously announced that it wants to start adjusting the EU rules for animal transports in 2023, but says it cannot do anything against long-distance transport in the meantime. The Netherlands also still transports thousands of animals every year to distant destinations by sea, according to figures from the NVWA recently

Last weekend it was not yet possible to refloat the stranded container ship in the Suez Canal. An attempt will now be made to get the 400 meter long container ship moving with dredging work and two additional tugs. Shipping traffic is blocked in both directions. The EVER GIVEN is on its way from Yantian China to Rotterdam.

World trade is in danger of being seriously disrupted by the channel blockade. The ship holds back nearly $ 10 billion in trade every day, according to estimates by shipping expert Lloyd's List. That ticks every day….

The longer the blockade continues, the greater the risk of economic problems such as empty store shelves. “Retailers and retailers do not always have stocks of large products and some seasonal products, such as electric bicycles, refrigerators or garden furniture,” ING economist Rico Luman told NU.nl on Wednesday. This kind of wholesaler comes largely from China.

Previous articleQuarter more organic farming not in every country, but as EU total
Next articleGerman states agree: quarter of EU money for 'greener' agriculture

New figures from the British Statistics Office and the British Customs / Tax Authorities show that in January mainly British meat exports to the ...
read more
EU

To meet the need for vegetable proteins, the European Union wants to become less dependent on the import of protein-rich crops ...
read more