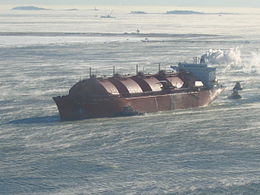 The European competition authority is about to block the proposed merger between the two largest shipbuilders in the world in South Korea. According to the EU, the merger between Daewoo Shipbuilding & Marine Engineering and Hyundai Heavy Industries is anticompetitive and should be stopped.

The European veto will be the first since Brussels prevented a merger between the Indian Tata Steel (including Hoogovens) and the German Thyssenkrupp more than two years ago. The EU is against it if mergers create economic superpowers that become market dominant, which can drive up prices for consumers.

Brussels is said to be particularly concerned about the dominant position of the two South Korean shipbuilders in the market for the transport of liquefied natural gas, especially now that European energy prices are rising sharply. The two companies dominate the shipbuilding market that transports super-cooled liquefied natural gas.

The proposed merger was first announced in 2019. Brussels had required the companies to come up with solutions to address competition concerns. Hyundai had proposed not to raise the prices for tankers for the time being, but that offer fell short.

The merger has already been approved by regulators in Singapore, China and Kazakhstan, but still needs a green light from authorities in the United States and Europe. A EU official said blocking the merger would help protect European consumers from paying higher prices for gas. The EU is the third largest importer of liquefied gas in the world.

Previous articleEuropean Parliament is once again trying to prevent livestock transport by sea
Next articleAfter millions of subsidies from EU, hardly any improvement in the Balkan countries

Fertilizer manufacturer EuroChem in Antwerp has received permission from administrators to partially resume production. Until recently, the company was...
read more
International