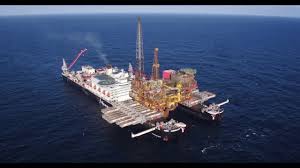 The Dutch-Swiss company Allseas has withdrawn from the Baltic Sea. The company is ceasing work on the construction of the controversial Nord Stream 2 gas pipeline. All ships and employees have since left the area.

The specialized company is withdrawing under pressure from the United States. The Americans threatened with sanctions against companies working on the Russian gas pipeline, which provides a direct connection between Russia and Germany.

The Americans fear that Russia will gain too much influence in western Europe in this way, as it gains control over an ever-increasing part of the European gas market. In addition, the US itself also produces more and more natural gas that they also want to sell in Europe.

Allseas, a Dutch-Swiss offshore company, was working in the Baltic Sea with two large pipe laying vessels and several support vessels. Around 1000 employees were active on the ships.

It is the largest pipe-laying project that Allseas has ever participated in. Approximately 2300 kilometers of pipe had to be laid on the 1222 kilometer route. It is therefore the longest underwater pipeline in the world.

Nord Stream 2 is intended to double the capacity of the first pipeline at the bottom of the Baltic Sea and to transport up to 55 billion cubic meters of extra Russian gas to northern Germany every year. From there the gas continues to consumers throughout Europe.

Russian Prime Minister Dmitry Medvedev said the US sanctions mean "no catastrophe" and that the pipeline can be put into operation within a few months. The Russian gas company Gazprom has alternatives to finish the pipeline. Gazprom has given the Akademik Cherskiy, a 150-meter pipeline ship, the task of continuing to build the pipeline. The Akademik Cherskiy is a lot smaller than the Pioneering Spirit of Allseas, and still has to come from a job in East Asia.

The gas pipeline is expected to be delivered at the end of 2020. The German government was a disgrace to the American threat of sanctions, which the Germans regard as serious interference in internal affairs.

Previous articleThe Ministry of Foreign Affairs calls on the Dutch in Baghdad to leave Iraq as quickly as possible
Next articleIran and US in full on collision rate; emergency meeting EU and NATO

The United Nations applauds the "success" of the recent agreement between Kiev and Moscow to unblock grain exports...
read more
EUC

LNV ministers are trying to agree on animal transport in EU