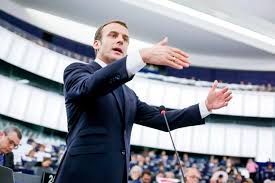 French President Macron wants to invest 30 billion euros in projects to "reindustrialize" France with modern technology. Thus, France must once again become a great nation of innovation and focus on the technology of the future.

Macron announced that 2 billion euros of that money will be invested in French agriculture over the next five years. The money is earmarked for innovations in digital, agrobotics and genetics to fund what he called the “third revolution” in agriculture.

France should become the leading "high-tech nation in Europe and be able to compete with China and the US", according to the president. Macron addressed about two hundred entrepreneurs and students in his Elysée Palace. In April there are presidential elections in France. Parliamentary elections will follow shortly afterwards.

The extra money will be used to finance “the champions of the future” in five years' time. Macron is thinking aloud about more efficient use of nuclear energy and the switch to sustainable energy. According to Macron, his country can already have a leading position in the use of green energy by 2030, partly thanks to nuclear energy.

His speech controversially included a new commitment to nuclear energy as Europe faces an energy crisis. Macron said France will invest €1 billion in nuclear energy by the end of this decade – some five years ahead of previous estimates. “The main objective is to have innovative small-scale nuclear reactors in France by 2030, along with better nuclear waste management,” he said.

His plan is to expand a number of so-called Small Modular Reactors to meet the rising demand for energy.

Digital technology, robotics and genetics are the three agricultural innovations Emmanuel Macron wants to support for “healthy, sustainable and traceable” food. He believes that this “third revolution” is the continuation of the “Mechanical and Chemical Revolution” that the agricultural world has already experienced.

“Biodiversity has become a rare commodity. It requires investment and breakthrough technologies, in agricultural robotics to sometimes eliminate certain pesticides," Macron argued, while also pushing for "bio-solutions" and "carbon sequestration."

The agriculture ministers of the rich western industrialized countries and the European Union promised to take action this weekend against the scarcity and...
read more
EU

France has started a trial of vaccine against HPAI bird flu. If the trial succeeds, the results will be presented to…
read more