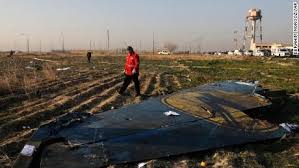 Russia must follow the example of Iran and recognize the responsibility for bringing down MH17. That is what the Dutch Foreign Minister Stef Blok said at a meeting with his Canadian counterpart about the recent plane disaster in Iran.

Last week, after two days of denial, Iran admitted being responsible for the accidental shooting of a Ukrainian passenger plane near Tehran. That happened during rising military tensions after an American attack on a senior Iranian military leader in Baghdad.

Dutch MPs were quite right to call Minister Blok's call, because the Russian involvement in bringing down the Malaysian MH17 over East Ukraine has been demonstrated several times by different authorities. Nevertheless, Russia has so far refused any form of co-responsibility or liability. It could still gain weight if Minister Blok also made sure that all European ministers would support Moscow's call, as a strong signal to President Putin, it was said.

At the end of last year there was official diplomatic consultation between the Netherlands and Russia on MH17 for the first time. So far, Moscow has rejected any responsibility and / or liability, and the Russians have been blaming the international JIT experts for investigating the shooting of MH17. From the Dutch side it has already been made clear to the Kremlin that it is still not too late for a public apology to the relatives.

In March the trial against four suspects of involvement in the Russian-made BUK rocket attack on the MH17 begins in the Netherlands. Three Ukrainians and one Russian were summoned by the Dutch justice for this, but it is doubtful whether they will appear in their trial. In that case they will be tried by specifications.

Exactly what the four men are suspected of is only revealed when the indictment is read out. The trial is being held in the highly secured court on the grounds of Schiphol Airport. It was previously reported that the four respondents were involved in one way or another in transporting the BUK rocket from Russia to the final launch site in East Ukraine.

Minister Blok believes it is of great importance that a careful investigation is now being conducted into the Iranian shooting of the Ukrainian aircraft that also contained dozens of Iranian Canadians. The Netherlands has offered Canada to share experiences and expertise with the MH17 disaster with Canadians and Iranians. Canadian Prime Minister Justin Trudeau also called Prime Minister Rutte about this.

Prime Minister Rutte emphasized, among other things, how important it is to share information with the grieving families, and that direct contacts with all parties are important. In a statement, Rutte conveyed his condolences to Canadian Prime Minister Justin Trudeau and stated that he supported Trudeau's claim.

Homes in Europe are increasingly being bought for large amounts by large investors and investors. According to a study by...
read more
EU

Homes in Europe are increasingly being bought for large amounts by large investors and investors. According to a study by...
read more

WUR on farm-to-fork: figures are an indication; big differences per country

WUR researcher Roel Jongeneel has told the European Parliament that the results of his study into the consequences of the Green Deal...
read more

Agricultural consultants can help countries with their food strategy