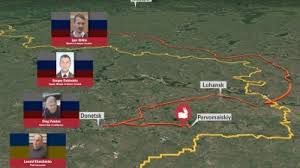 A majority of Russian citizens feel that their country should pay grief to the relatives of the shot down Malaysian passenger plane MH17, if it turns out that Russia is responsible for the downing of the plane.

This is apparent from an opinion poll by an independent Russian research agency, in collaboration with a Dutch university and a Dutch thinking group. The research was conducted at the end of 2019, with more than 1,600 Russians specifically being asked about the Netherlands, the newspaper Trouw writes. About 55 percent of the Russians agree "or" totally agree with the statement that Russia should pay grief if Moscow's debt is proven.

The issue has been causing tensions between Russia and the Netherlands for many years. The Dutch government and public opinion hold Russia responsible for the shooting down of the Malaysian liner from the Netherlands in 2014. In addition, all 298 passengers were killed in the east of Ukraine, including almost two hundred Dutch people.

In three weeks, a trial in the Netherlands against four suspects of shooting the aircraft will start. The suspects are three Russians and one Ukrainian. They would have been involved in the transport of the Russian rocket to the pro-Russian rebel area. They are accused of murdering the 298 passengers, including 196 Dutchmen.

From the very first moment, Dutch prime minister Mark Rutte has argued for redress for relatives, trial of the perpetrators, and public recognition of guilt.

The Russian government has so far denied iedere involvement, refused to extradite suspects, refused to cooperate with Dutch justice, and prevented the establishment of a special MH17 court in the United Nations. The Kremlin also rejected the findings of the international JIT investigation team, which established that the weapon was a Buk rocket from a Russian battalion.

A quarter of Russian citizens find it 'difficult to say' who is responsible for the disaster. A small majority (53 percent) think the Ukrainian army is guilty. The proportion of civilians that the Russian army, volunteers or pro-Russian rebels have designated as perpetrators is growing. That is now 10 percent, while in an older, comparable study it was 2 percent.