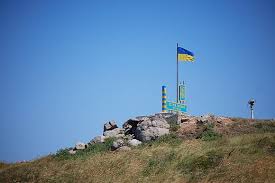 The Russian army has left the Ukrainian Snake Island. According to the Russian Defense Ministry, they are doing this to show that Russia is willing to cooperate with the passage of 'agricultural products'.

The eviction could be a first step in clearing grain export routes across the Black Sea. Snake Island is a small island of barely 660 meters long and 440 meters wide in the Black Sea. It forms the most southwestern part of Ukrainian territory, about 30 kilometers offshore in the Black Sea, also near the coast of Romania.

The island therefore has a strategic location, which means that Russian warships from the harbor on that island block access to the southern Ukrainian seaports. Ukraine says the Russian army did not withdraw voluntarily, but was chased away by Ukrainian bombing.

For months, negotiations have been going on behind the scenes about free passage to Ukrainian ports to get the accumulated grain out of the country. Now that Turkey seems to be taking the lead as a mediator, the Netherlands is offering help to clear the sea mines in the shipping routes. But before that is possible, an agreement must be reached between Russia and Ukraine on a so-called sea corridor.

"If we can play a role, we are happy to do so," Defense Minister Kajsa Ollongren said during the NATO summit in Madrid on Thursday. Dutch Prime Minister Mark Rutte called the NATO meeting 'completely historic'. The main reason for this is the scaling up of the military organization from 40 thousand to 300 thousand active soldiers.

US President Biden announced that the United States will increase its military presence in Europe. This means that there will be a permanent headquarters for the US Army Corps in Poland.

The Polish authorities have offered a reward of several hundred thousand euros for tracking down the perpetrators of chemical pollution...
read more
European Commission

On Thursday the heads of government of the EU countries will meet in Brussels to discuss the new multi-year budget. Given the major disagreements ...
read more

Some large companies in the European seed sector have urged the European Commission to protect patent laws and intellectual property ...
read more

Iran and Kurdistan could use some Dutch water aid