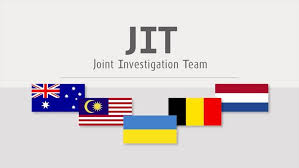 "Russians try to thwart the trial against MH17 suspects"

The Dutch Public Prosecution Service has strong indications that Russia is obstructing the investigation into the downing of flight MH17. Witnesses feel threatened and fear for their lives. Russian secret agents would also have tried to commit computer burglary.

That is what the public prosecutor said on the second day of the criminal trial in the heavily protected court at Schiphol began, reports the Belgian newspaper De Tijd. "The facts cast a dark shadow over this investigation. There is strong evidence that Russia is keen to sabotage it. "

The fate of the anonymous witnesses, who made incriminating statements for Russia, is particularly worrying. The officer called it "a realistic scenario" that the Russian intelligence services are trying to find out their identity, putting their lives at stake. He pointed out that the Russian intelligence services were previously behind some murders on European soil.

In the first trial of the July 2014 events, four suspects - three Russians and one Ukrainian - are on trial for their involvement in the transportation and deployment of the Buk launch installation that brought down the Boeing 777 of Malaysian Airlines over Eastern Ukraine. All 298 people on board died. Most of them were Dutch.

The four suspects - Igor Girkin, Sergey Dubinsky, Oleg Poelatov and Leonid Chartsjenko - risk lifelong murder and the destruction of an aircraft, but are not accused of firing the rocket themselves. Probably unknown Russian soldiers did that. None of the four suspects is present at the trial. They are probably staying in Russia, but that is not going to be extradited.

To Moscow's great anger, Russia did not get a seat on that JIT team, with which Dutch Prime Minister Rutte would have been put in suspect bank in advance. Russia subsequently rejected all investigations and findings of the JIT investigation.

Central to the trial against the four suspects is now a 36,000-page file of the Joint Investigation Team. Their conclusion is that MH17 was shot from a Buk launcher that was brought from Russia to Eastern Ukraine.

Russia has been spreading all kinds of denials and alternative versions of the facts since the incident. It claimed for a long time that the plane was shot down by a Ukrainian fighter plane, and even produced fake satellite images. Later it was said that the Ukrainians had taken the device down.

Previous articleSurvivors MH17 are not allowed to view all the evidence
Next articleCoronavirus now global crisis: US blocks air traffic from the EU