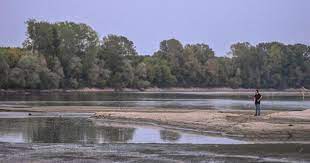 Due to the continuing extreme drought in southern Europe, smaller harvests of winter crops are now being taken into account for the third month in a row.

In several countries spraying bans have been imposed, rivers are almost dry, and even the drinking water supply is out of order. The Italian agricultural organization Coldiretti said 30 percent of agricultural production is at risk.

In Mediterranean agriculture, the yield potential of common wheat has declined in 13 of the 25 EU countries, with the greatest decline in France, Hungary, Poland and Romania. In Italy and Spain, the extremely hot and dry weather also negatively affects summer crops such as maize and sunflowers.

According to the MARS (Monitoring Agricultural Resources) bulletin of the European Commission's Scientific Service (JRC Joint Research Centre), the forecasts for the hectare yield of common wheat are already 2.2% below the five-year average, and that of durum by 4. 7%.

Southwestern Europe has been captivated by an unusually early and intense heat wave for the past week. In Biarritz on the French coast, a temperature of no less than 42.9 degrees was measured. In San Sebastian (Northern Spain) it even became 43.5 degrees. These are also particularly high temperatures for Southwestern Europe, especially so early in the summer.

The Spanish water reservoirs are on average at half their normal capacity. The situation in Andalusia in southern Spain is extremely serious. There the reserves are only 35% of their capacity.

The province of Lombardy has declared a state of emergency in northern Italy due to the drought. Agriculture there makes extensive use of the river water. The drought in the agricultural Po Delta is the worst in 70 years.

According to the Ansa news agency, water is already being rationed in more than 200 communities in northwestern Italy. The water level of Lake Maggiore and Lake Garda is significantly lower than normal for this time of year, and the Tiber, which flows through Rome, is also low.

Previous articleOECD: from now on tie agricultural subsidies to environmental and climate tasks
Next articleEU energy: quickly less gas, oil and coal and more from sun, wind and bio

The EU countries agree that part of the hundreds of billions for the European energy transition will have to come from...
read more
EU