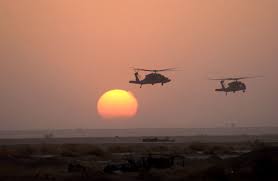 The current "cycle of violence" in Iraq must end before the situation gets completely out of hand. The EU calls on all parties involved to show "maximum restraint" and to behave responsibly. "A new crisis can jeopardize years of efforts to stabilize Iraq," said Foreign Commissioner Borrell.

The Dutch cabinet is concerned about the situation in the region after the attack on the senior Iranian soldier Soleimani. But Minister Blok (Foreign Affairs) says, unlike Dutch MPs, in his first reaction nothing about the American attack in Baghdad.

Blok points to the attacks on the American embassy and to the anti-ISIS coalition troops of recent days. He calls them "unacceptable". The Netherlands condemned those attacks. According to Blok, Iran is conducive to instability in the region and Soleimani played a role in this. Blok, who speaks on behalf of the government, calls the situation worrying and serious.

Tensions between the United States and Iran have flared up after the Americans killed Iranian General Qassem Soleimani on Friday in an air strike at an airport in Iraq. Soleimani was regarded as the most important soldier and, after great Ayatollah Ali Khamenei, was the most powerful man in Iran. He is buried on Saturday.

Iran wants revenge and threatens to hit back hard. President Donald Trump has sent an additional three thousand soldiers to the area to ensure security in the region. Earlier this week a battalion of 750 soldiers preceded them. Since May the Americans have already sent about fourteen thousand extra soldiers to the Middle East following the growing unrest.

The Dutch travel advice for Iraq remains unchanged, says the ministry. Because the ministry has been expressly advising for some time not to travel to the capital Baghdad, all Dutch people in the region have received a message that it is better to leave the city.

The Israeli government supports the US after the deadly attack. The US has the right to defend itself, Prime Minister Benjamin Netanyahu declared, as did Israel. Israel is a loyal ally of the US and is preparing for possible revenge actions from friends of Iran in its region.

Previous articleTurkey sends troops to Libya; Tripoli did not (yet) ask for it
Next articleGazprom must complete the construction of Nord Stream 2 in the Baltic Sea itself

The president of the CDU department in the German state of Thuringia, Mike Mohring, also resigns that board position. Earlier Mohring already ...
read more

European Green Deal, organic farming and F2F postponed for at least one year

The European Commission has decided to postpone two important parts of the Green Deal by at least one year ....
read more

Environmental agency: EU must do more quickly to achieve its climate target